Agency Bay Lodge is a fishing resort and we think you’ll find a taste of our knowledge and passion for fishing from the information below. No matter the fishing conditions, you will find that the staff of Agency Bay Lodge is ALWAYS dedicated to helping you catch fish.

The difference in Agency Bay Lodge?  The difference is that we fish.  We fish hard and we care about you catching fish.  Along with our time on the water and our partnership with local guides, we have the products that produce at your fingertips so no trip will be lost because you didn’t have the goods.

One of our unique features at Agency Bay Lodge is that you will find a full-service tackle shop with gear you will need for all species of fish in Leech Lake but we specialize in gear for walleye and musky. We carry the best baits from the top brands in the colors and sizes that produce fish consistently on Leech Lake. Additionally, you will find that the gear in the shop does not have resort prices but prices you would expect to find at your most popular big box sporting goods stores.

Some of the Many Brands We Carry:

Some of the Feature Products We Have on Hand:

Musky
-Bucktails from Musky Mayhem- Including the new Trigger, Detonator, and 10-9 Combos.
-Difficult to find Jerkbaits from Chaos Tackle- Including the Navin and Roundnose Jerkbaits.
-Baby Beaver Baits- We can do a tutorial on the dock on how to fish these incredibly productive and versatile bait. This bait produces fish in all conditions and may be the best bait in my boat when fish are neutral or negative conditions.
-Musky Innovations Bulldawgs, Prodawgs, DoubleDawgs, and Swimming Dawgs- All in sizes, colors, and styles. that are specific to produce on Leech Lake. A killer assortment honed in on Leech fish.
-Stealth Tackle Leaders- The best leaders built specifically for the lures we use and the situations we use them in.
-Lakewood Tackle Boxes- Boxes that last a lifetime in multiple sizes and styles.

Bass/Panfish
-Assortment of spinnerbaits and buzzbaits for fishing the wild rice beds and reeds that Leech Lake is famous for.
-Some of the best tubes and tube jigs on the market for targeting our growing smallmouth bass population.
-Assortment of panfish jigs by Northland Tackle meant for attacking bluegill, crappie, or perch.
-All the jigs, floats, weights, and terminal tackle you might need.

We have partnered with some of the best local guides on the lake.  Although we pride ourselves on being knowledgeable of the lake, the fish, and current patterns, nothing substitutes for time on the water with a pro.  Below are a few of the local guides we work with.  We recommend you check out their website, follow their social media, and watch their YouTube videos.  Feel free to ask us for our recommendation and tell us what you are looking for!

Leech Lake is Minnesota’s third largest lake, and one of the lakes the Minnesota DNR qualifies as a “top 10” lake in the state, in terms of fisheries management for angling experience.

The Minnesota DNR has drafted a specific management plan for Leech Lake that includes stocking, habitat protection, and continued support for cormorant control. This, combined with the natural makeup and fertility of the lake, provides one of the best inland fishing waters in North America.

One of the reasons we love Leech Lake is because of our beloved state fish, the walleye. Leech Lake is managed for large numbers of walleye, but also has a great size range with trophy class fish available to catch throughout the open water season. A unique characteristic of Leech Lake walleye fishing is that the fish tend to stay shallow, even in the hot summer months. We often target walleyes on weed edges in 8-12 feet of water, transition lines from rock/gravel in 6-16 feet of water, and break lines in 12-18 feet of water. The size of Leech Lake combined with the array of structure allows walleye anglers to catch fish utilizing many different tactics.

May
The opener typically finds walleyes on the spawn or post-spawn. If they are still on the spawn, shallow gravel flats can be key. Tactics can include pitching jig and minnow or jig and plastic, or lindy rig and minnow. Size of fish can be great if fish haven’t spawned yet, and numbers of fish caught is usually very high at this time. Post spawn the fish start to recover and they look for new weed growth and sand adjacent to new weed growth.

June
After recovering from the spawn, walleyes start to become very active and can be found on a number of different locations, including transition areas from rock bars to sand/muck and weed edges adjacent to cabbage. Pulling rigs with crawlers can be a deadly effective, simple, and fun way to catch your limits. This is one of my favorite bites of the year!

July
Fish have now set up on summer seasonal patterns and are actively hunting young of the year perch, as well as crayfish and ciscos. All the rock bars on the lake can produce limits of walleyes. The drop offs and sand bar break lines in Agency Bay can produce limits, and the edges of established weed beds can be extremely productive as well. The most popular tactics are pulling rigs, trolling cranks, and lindy rigs with minnows. Although the fish can be in predictable locations, the warmer water and direct sun can make them finicky biters. Utilizing wind, low light conditions, or even lighter line and longer leaders pay off to produce bites.

August
Most of this month is much like July, but when water starts to cool off late in the month we start to see fish move up into the weeds following the bait and the warmer water. Transitioning to more aggressive tactics like throwing swimbaits, jigs and plastics, and even jerkbaits start to produce more large fish. Trolling larger cranks at 2-2.4MPH produces reaction bites from larger fish too. Many musky anglers start to report bi-catches of 24”-28”+ walleyes consistently on their musky-sized plastics and jerkbaits.

September/October
As the water continues to cool the perch move shallow and the predators follow. This is a great time to catch Jumbo perch as bi-catch while fishing for walleyes. Fishing lindy rigs in 10 feet of water or less can be very popular and produce limits. Early fall I would focus on sandgrass, cabbage and even break lines just off of reeds. By October fish have congregated on rocky points.

Many Minnesota musky anglers know that the Leech Lake strain of fish is what the MN DNR uses to stock their lakes across the state, and is widely known for fast growth rates and exceptional top-end size potential, with Leech Lake strain fish recorded up to 58” in length.

Leech Lake itself has an incredible number of muskies in the lake and an average size class and top end to get any experienced musky angler excited.

Muskies begin to consistently set up on structure by July. At this point the rule is simple; high skies or calm, fish the weeds. Wind and/or clouds, we fish the rocks. On a warm summer day, tactics can be simple- fish at the depth of the fish to get them to follow, then go back after them when the wind conditions are right, or the sun is going down.

Leech Lake is famous for the September “reed bite”. When the water begins to cool the perch will move into the reeds and the muskies will follow. This can be one of the best bites of the year. Big spinnerbaits, buzz baits, and prop-style topwater baits produce exciting strikes. Multiple fish days become more common, and big fish are seen and caught regularly.

Largemouth bass are gaining more notoriety on Leech Lake due to the abundance of habitat and size potential of fish. From opener through fall, trophy size largemouth exceeding 5lbs can be found. Smallmouth populations continue to rise, and this feisty fighter can be a nice change of pace. Often living on the same rock bars as walleye and musky, pitching tubes along the break lines of these reefs can produce the bronze beauties.

Perch populations are on the rise and you will catch 5-10” perch pretty much anywhere on the lake throughout early and mid-summer. When water starts to cool in August is when the jumbo perch start to school shallower and become accessible in the sand grass flats and cabbage weeds.

If you’re wanting to fish at night, fishing with live bait under a lighted slip bobber or throwing crankbaits can produce walleye. Even though our beach is a shallow grade, after dark the walleyes will move in shallow to chase perch, panfish, and minnows. Catch and keep is allowed for this, although we do ask to practice “selective harvest”. 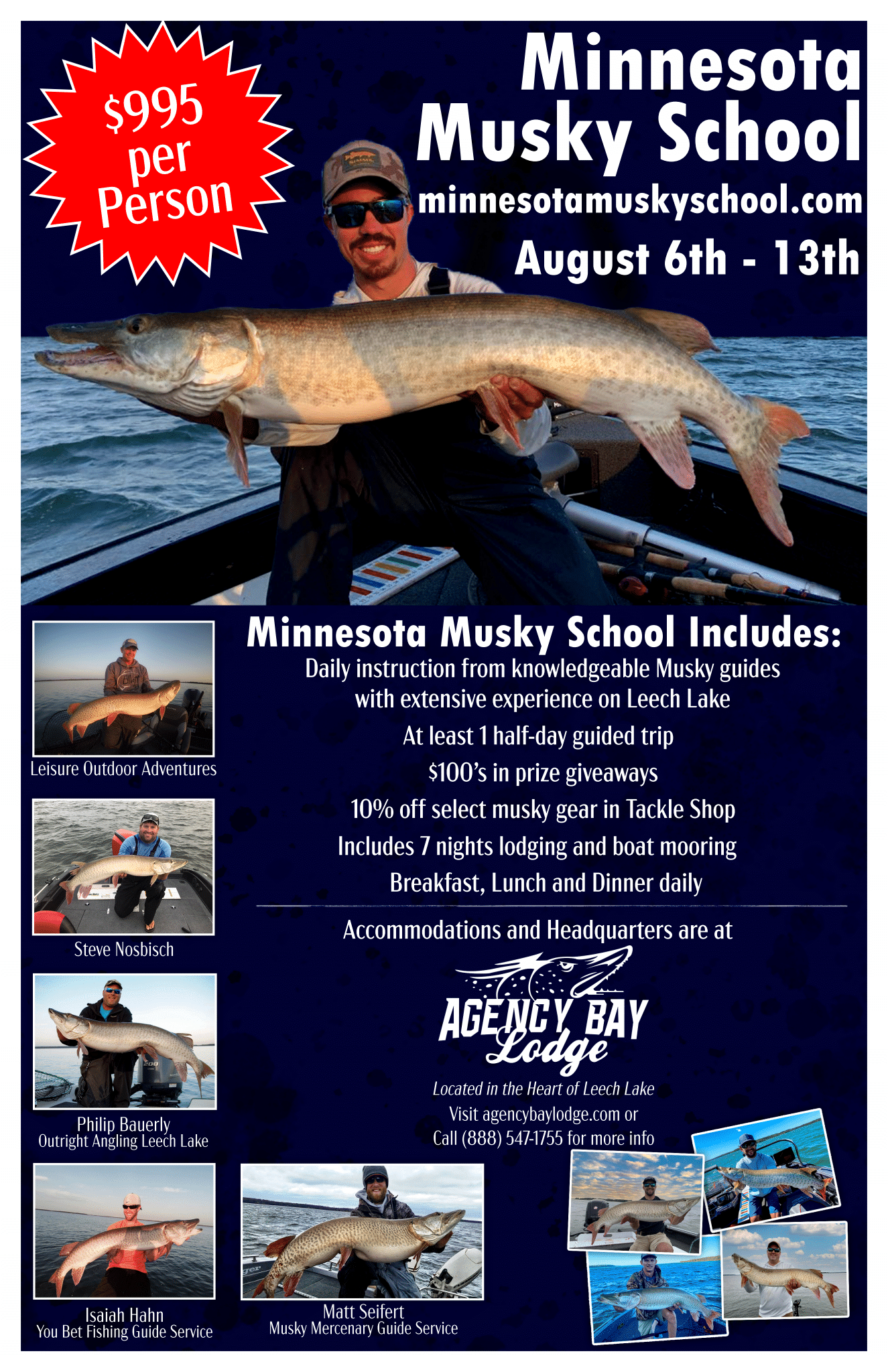